A Chinese Temple of Chinatown in the Philippines

• What happened at the activity? Include sights, sounds, smells, tastes, tactile memories.

A Chinese temple in Chinatown of the Philippines

Having lunch, looking around China Town and practicing Chinese customs in a Chinese temple.

We prayed by lighting an incense; we tried to do Jiaobei (Moon block).

To understand, experience and enjoy the Chinese traditional cultures and customs.

I had not been to any Chinatown before I visited the one in Philippines. I had an opportunity to go there with a Chinese Filipino and exchange students who are studying at Ateneo De Manila University.

When I went to China town, I felt like it is a poor place since there were many beggars. Moreover, the street was messy and dirty. Especially, the river was polluted and stinky. It gave me a bad impression even though I heard about how there is before. However, I heard that the Chinatown is a meaningful place for Chinese Filipino such as Mark (my informant).

I was a little surprised because I know Chinese Filipinos are usually rich in the Philippines, but Chinatown looked poorer than I expected. There were many kinds of shop which sell Chinese products. Some shops sell Chinese charms of red color which means lucky.

After lunch time at a Chinese restaurant, we moved to a Chinese temple. When I got there, I found some people praying to deities of Chinese gods by lighting sticks of incense. After that, I learned how to do Jiaobei (Moon block) which lets you ask a question and get the answers from gods.

• How you felt during the activity?

• How people responded to you?

In the Chinese temple, there were just a few people. They looked at our group with curiosity since our members are composed of foreigners except Mark. When I practiced the Chinese custom, Mark looked a little nervous since he knows that I don’t believe in any religion.

• What your key informant told you?

Mark (my informant) advised our group not to wear outstanding clothes and we should gather together since China town is not a safe place.

When our group visited the temple, Mark (my informant) asked our group to be quite there and understand Chinese culture. He told our group how to pray using incense. He instructed us the process in doing that; expecting us to quietly practice. He also told us how to do Jiaobei (moon blocks). According to him, this is the way to do it:

– You drop them on the ground to determine the answer of your question: either yes or no

–  If the blocks show both the round and the flat faces: the gods say “yes”

–  If both blocks show the round face up: the gods are angry and say “no”

–  If both blocks show the flat face up, they are laughing at your question

• Evidence that your presence inﬂuenced the scene. 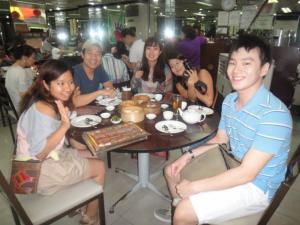 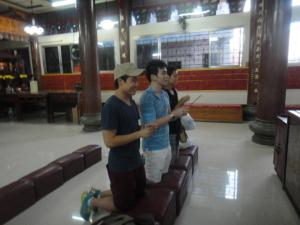 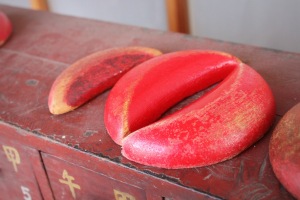 The Jiaobei or temple moon blocks that were used to determine the gods’ answer.

Before I go to Chinatown, I heard the history of Filipino Chinese from Mark; but it was hard to understand since I just came in the Philippines last year in June. I found some advantages of field survey by going there by myself.

Above all, I could experience Chinese culture and custom by myself with Mark’s explanation. I could feel the place’s atmosphere. If I just listened and read some writing about them: I might have not understood well since I can’t understand all of that by myself.

Next, I could meet a Chinese Filipino in person and talk about their culture. Thanks to Mark: a Chinese-Filipino; I could listen to his ideas. He helped me understand his culture. If I go without Mark, it’ll be hard for me to feel how the custom is meaningful.

2. What did having a key informant add to your understanding?

Mark told us the history of Chinese Filipinos. First of all, Chinese Filipinos have a problem assimilating into a Filipino society because they have different history and creed. They tend to be conservative and sensitive compared with Filipinos.

Especially, Mark’s parents’ generation spent a hard time in the Philippines. When they were young, they lived in Chinatown because they were discriminated. However, they moved to their house in another town as time passed by. According to Mark: Chinese Filipinos are still closed and not open-minded for foreigners since they have protected each other for a long time from other national people.
3. What was learned from participant observation at this event that a questionnaire or interview about it might miss?

I learned Chinese Filipinos’ situation and history through the interview. Thanks to Mark, I could listen to his family story in person. Before he told it to me – I just had thought that it is not that serious; but I leaned how they felt and it made them stressful.

4. For what purposes might a questionnaire or interview be better than participant observation?

I could get the specific pieces of information needed without having to deal with unnecessary details. I can also narrow down the answer I wanted to acquire by asking key questions without tackling unwanted features.

Posted by Ethnography Projects under Mr. Labastilla's class on February 26, 2013 in Uncategorized